How to Sharpen a Tactical Knife – 2020 Updated

How to Sharpen a Tactical Knife:
The actual process of the knife sharpening might seem like a relatively simple thing that requires little explanation. But, actually, there are a lot of things that one needs to consider – like the different honing angles, various types of blade grinds, and, of course, the different types of blade steels.

But what if you’re inexperienced and don’t know a lot about these things? If you don’t know the difference between an oil stone and a water stone, or between a saber grind and a flat grind, then read on and find out everything you need to know about the process of knife sharpening.

Before we start to talk about the actual process of sharpening, let’s take a look at the whetstones.

These things are usually divided into two distinct groups – the man-made stones and the naturally occurring stones. The first team consists of stones such as the India (silicon carbide) and Crystal (aluminum oxide) stones, and the second group features stones like the Arkansas Oil and the Japanese Oil ones. Furthermore, the stones from both of these groups can be classified as either oil or water stones, and that means that they’re intended to be used together with oil or water as their lubricants.

We should also mention that there are some additional types, such as the ceramic and diamond hones which can be used both with and without lubricants. Both the man-made and the natural stones can be purchased in different grits – finer grits are less abrasive and coarse grits are more abrasive.

The reason because of which you should know at least a little bit about these things is that the different types of blade grinds have to be honed at different angles. Let’s move onto the blade grinds.

In the case of the hollow and saber grinds, it’s the line that’s located above the knife’s cutting edge, extending from the tip to the back of the blade. 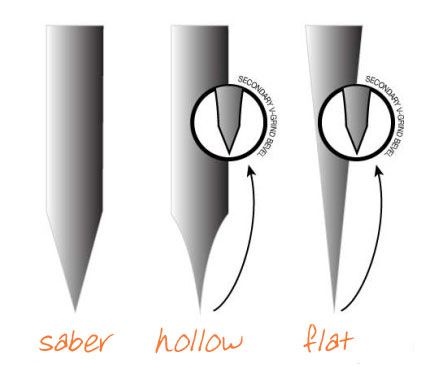 The Types of Whetstones

How to Sharpen a Tactical Knife? Knives that sport soft blades, like the SK-5 (50 to 55 RHC) or 1095 are usually used for the massive blades that feature saber grinds. Although they sharpen pretty quickly, they typically tend to incur a pretty high amount of damage to their edges and often require the highest degree of repair.

This means that, when you’re honing a saber grind knife that was manufactured from the softer blade steel, you should always start with the coarse grit and slowly progress to the more delicate grit. But don’t forget to leave the edge rough as it will dull pretty quickly the next time you decide to use it.

The knives with hard blades, on the other hand, will require you to start with the medium grit, and then progress to the finer grit. Some of such blades would include ATS-34, 154-CM, and D2 (58 to 63 HRC).

If your blade has a hollow grind and an unusually thin main bevel, you should polish its cutting edge with an exceptionally fine grit.

Regardless of which class of a whetstone you decide to use, the process of honing the knife will be relatively the same. Once you lubricate the grindstone, you can place the knife’s edge against it and slowly move its cutting edge across the stone while trying to maintain the needed angle (the angle should depend on the main bevel’s thickness).

After that, you can turn the blade to the other side and do the same thing, and then just alternate the sides until you reach the desired sharpness. If you have difficulties with maintaining the same angle during the sharpening, don’t forget that there are honing aids that are relatively cheap and can be purchased almost anywhere.

As you can see, the whole process of sharpening a blade should always start with selecting the proper type of a whetstone, which should be based on the type of steel that your knife was made out of. In addition to that, you should be careful about the honing angle – it’s determined by the thickness of the bevel. Also, it’s essential to keep a consistent edge bevel angle while you’re honing the bevel – we could almost say that it’s the actual key to achieving an exceptionally sharp cutting edge.

This was our guide on How to Sharpen a Tactical Knife, If you face any issues while sharpening your knife you can contact our expert team and our team will try to resolve your issue within 24-48 hours.